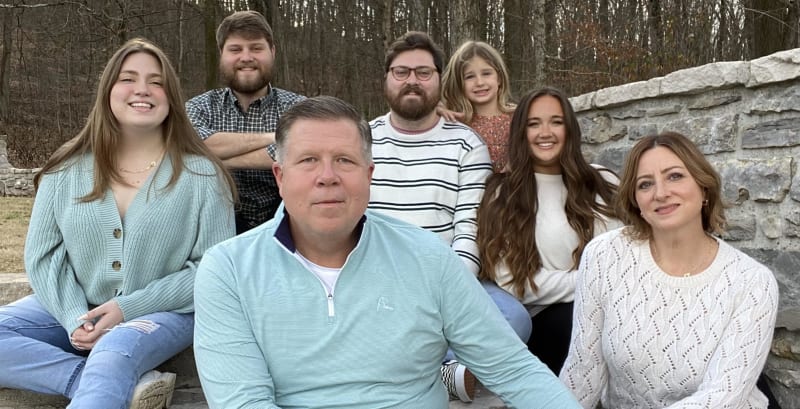 (Above) After graduating from Bishop Lynch High School in Dal- las, Texas, Mr. Jim McIntyre enrolled in the University of North Texas majoring in history with a focus on U.S. diplomacy. He then worked in the restaurant industry for a year when he ran into his former principal who offered him a teaching position. After a few years of teaching, Mr. McIntyre obtained a Master’s Degree in Educational Administration from Texas A&M University. Photo courtesy of Lake Highland Preparatory School.

As the 10th Lake Highland President, Mr. Jim McIntyre brings more to the Lake Highland community than just his 31 years of educational experience. Mr. McIntyre also brings an enthusiasm for the whole child approach and the Highlander values of love, concern, and mutual respect. He sees his role as President not as an opportunity to push a strict set of rules but as one where he can nurture individual relationships with our school community and deepen the existing values set forth by the Honor Code. His drive to uphold these values is derived day in and day out from the enthusiasm he witnesses from students, parents, and faculty.

As stated in the parent newsletter, President McIntyre described his first steps on campus as, “Hearing the melody of a song for the first time but already knowing the words.” The backdrop of Christian values, patriotism, and leadership is at the heart of what President McIntyre has always focused on instilling in his schools. So while he had never been to Lake Highland before, the culture here was nothing new.

Before arriving in Orlando, the McIntyre family called Nashville their home for the past 17 years. His recommendation for pizza in Nashville would be Five Points Pizza. However, when it comes to hot chicken, there is a family rivalry over the issue. Mr. McIntyre favors Prince’s, while Mrs. Amy McIntyre prefers Hattie B’s. Rivalries aside, the pair have been together for 30 years and have one daughter, Anna Grace, who will be a sophomore at the University of Central Florida. They also have two sons, Peter and Henry, and one granddaughter Leila.

One of the more notable perks of Mr. McIntyre’s current position comes in the form of the Presidential House on the East end of campus. The couple is still moving in but looks forward to hosting events in the red-brick home possibly this year. Mr. McIntyre appreciates the extensive history of the home and its exquisite architecture. When the home was built, scripture quotes were in-
scribed around the framing of the structure. The foyer’s brass antique door handles originate from former President Hudson’s mother’s church. The architecture features 18 corbeled Jack Arches, 5 full Arches, Herringbone Brick Panels, and two Rumsford fireplaces. Its convenient location also makes for a quick walk to work each morning.

Living on campus also stresses the importance of campus safety. President McIntyre emphasizes, “Safety is the number one [priority]. It’s having a plan, being thoughtful about it, [and] making sure that we’re putting student and faculty safety as a top priority [every day].” Recently, Lake Highland’s administration updated its protocols by requiring students to wear lanyards as identification. This will also progress toward buildings being locked without the use of IDs to unlock them. The efforts of stu-
dents to uphold these practices are rebounded by Mr. Conan Bickford and his team of officers who work around the clock to further monitor campus and address suspicious activity. Mr. McIntyre prioritizes feeling both physically and emotionally safe at school in order to maximize learning potential. He wants LHP to be an environment that individually nurtures students to find confidence in their own abilities yet foster collaboration among peers.

With a background in teaching and coaching, President McIntyre offers a unique perspective on the role of school administration. He holds teaching as, “One of the most important things that anyone can do because it is so service oriented.” Starting out as a teacher and moving to his position has allowed him to appreciate his faculty on a deeper level. He explained, “It’s very humbling to watch…to be an observer as a President of a school. To watch the sacrifice and commitment [of teachers] is inspiring.” As for his coaching background, President McIntyre confessed, “I tend to like to ask for feedback and get different perspectives…When you’re coaching, the best coaches have great assistants…As a President, this tells me to not be someone that goes it alone…I feel like I’m doing something with students and with teachers…as opposed to doing something to people.”

While President McIntyre has only been serving the school for a few months, he has already made an impression on the school community through his commitment to getting involved. He’s met numerous parents through first day of school coffee talks, participated in Unity Meetings, and attended some athletic practices. The student body has also made impressions on the President as well, as he observed, “The Lower School’s excitement and wonder on the first day to meet their teachers and friends…The Middle School’s servant’s hearts…The Upper School’s poise, maturity, level of involvement, and welcoming.” The school community is excited for the future of Lake Highland with this change in structuring, but also happy to uphold the traditions that have guided us for the past 50 years.